Spirit of Huntington Joins Another Face of Beauty Fashion Show

John’s Crazy Socks, the world’s largest socks store founded by an award-winning entrepreneur with Down Syndrome, John Cronin, will host a fashion and art show, “Another Face of Beauty,” at Walt Whitman Shops on Saturday, October 8 at 1:00 p.m. The event will feature 14 models, artists, and musicians who have differing abilities and will showcase their special talents in front of hundreds of spectators.

“In furthering our mission of showing what people with differing abilities can do, we are organizing this fashion show so people can see beauty and art in a whole new light. People who are differently abled possess the same talents and skills as their abled counterparts. We want to show society that people with differing abilities can make an impact in the world. This starts by giving them a platform to showcase their creativity,” said Mark X. Cronin, John’s father and co-founder of John’s Crazy Socks.

The event, taking place in Walt Whitman Shops’ Center Court, will begin with a performance by the award-winning FREE Drum Corps and the singing of the national anthem by the FREE Chorus. The fashion show will conclude with a musical performance by the Music Academy of Special Learners. In addition, there will be an art display set up, featuring works from local adults with differing abilities.

As a growing social enterprise, the company has created 34 jobs, 22 of which have been filled by people with differing abilities.

All proceeds from the event will be donated to the event’s co-sponsors, Special Olympics New York and Family Residences and Essential Enterprises (FREE). Other participants in the event include The Viscardi Center, the Music Academy for Special Learners, and the Spirit of Huntington Art Center.

The success of John’s Crazy Socks has been recognized worldwide. The company has shipped over 380,000 packages to 88 different countries and donated over $500,000 to their charity partners such as the Special Olympics, the National Down Syndrome Society, and the Autism Society of America. The father-son duo also recently launched their podcast, “The Spreading Happiness Podcast” where they share their remarkable business journey and life lessons learned along the way.

John’s Crazy Socks was inspired by John Lee Cronin, a young man with Down syndrome, and his love of colorful and fun socks—what he calls his “crazy socks.” He and his father, Mark X. Cronin, started the company as a social enterprise with the mission of Spreading Happiness™. With more than 4,000 socks, John’s Crazy Socks is now the world’s largest sock store. More than half of their employees have differing abilities, and their Giving Back program has raised over $500,000 for charity partners like the Special Olympics, the National Down Syndrome Society, and the Autism Society of America. Most of all, they are Spreading Happiness™. 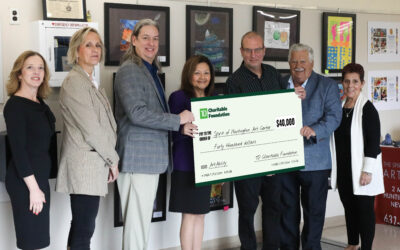 The Spirit of Huntington’s ArtABILITY ’22 Exhibition received a generous grant of $40,000 in support of the tour, and the classes that contribute their artwork to the exhibition over the coming year. 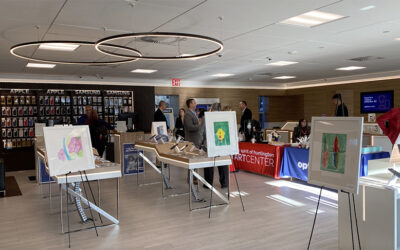 A breakfast reception was held to celebrate Veteran’s Day and to honor the Veterans community hosted by Optimum and in partnership with The Spirit of Huntington Art Center! 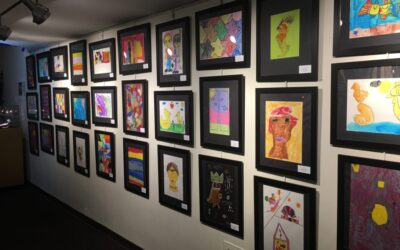 The Spirit of Huntington Art Center exhibition ArtABILITY ’22 will be hosting a Closing Reception on Wednesday, November 16, 2022 from 10:00am to 12:00pm here at the Rise in Spirit Community Center.